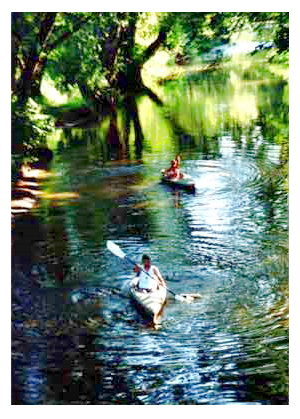 Northwest Carriage Museum
nwcarriagemuseum.org
Explore the world of the 19th century traveler at the Northwest Carriage Museum. The museum is home to 23 beautifully restored horse drawn vehicles. Many of the carriages in the museum were the Cadillac's of their day, with ivory door locks, brocade trim, and leather interior. Included in the museum's carriage collection are Belle Watling's carriage from Gone With the Wind, a meticulously restored Hansom Cab, and a carved panel hearse. The museum is family friendly, offering several interactive and kid friendly displays. Try on a buckskin vest or a bonnet, climb into the Democrat wagon and have a "pioneer moment". Or learn how to put a wheel together in the wheelwright's shop. The family will have lots of fun while learning, too! Open Wednesday through Saturday; summer 10-5pm, winter 10-4pm. 360-942-4150

Willapa Seaport Museum
310 Alder Street, Raymond. 360-942-4149. Next door to the Carriage Museum, visitors will find an astonishing myriad of marine artifacts, information, insights and humor. The museum ties together displays of memorabilia from the logging industry to shipbuilding, from the life saving service of the Spruce Division (WWI), and from Native Americans to lightships and lighthouses. Several collections of thousands of valuable history of Willapa Bay and the Pacific Northwest to the sea. Hours: Wed. - Sat. 12am to 4pm. or by appointment. 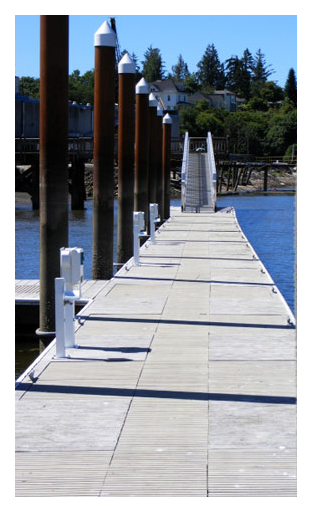 Performing Arts
Raymond Theatre - The Raymond Theatre is listed on the National and State Registers of Historic Places. This 360-seat movie house, built in 1928, has been restored and features a five-rank Wurlitzer Theatre pipe organ. The Theatre screens current and silent movies and features live entertainment. Located in downtown Raymond at 323 Third Street. Contact them for more information at (360) 942-4127.

Hannan Playhouse - A small, intimate theatre located across the street from Eighth Street Park in Raymond. Call (360) 942-5477 for information.

Bird watching on Willapa Bay
A variety of resident and migratory waterfowl feed in the wetlands of Willapa Bay. The Bay's tidelands are an important rest stop for waterfowl and shorebirds that follow the major north-south migration route known as the Pacific Flyway. The Audubon Society has recently established the Southwest Loop of The Great Washington State Birding Trail. Explore in a kayak or on-foot. Maps are available in out lobby. 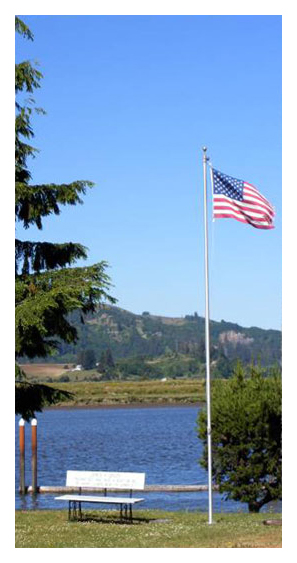 Plus, Hiking, Biking, and Fishing 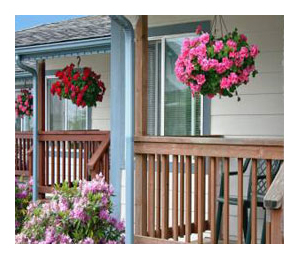 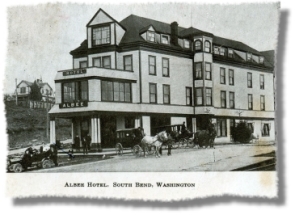 Original ALBEE HOTEL, 1891
Looking from Maple Street Towards Hotel
* Memorial Street is behind the hotel in this picture 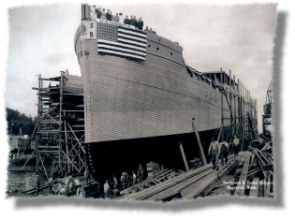 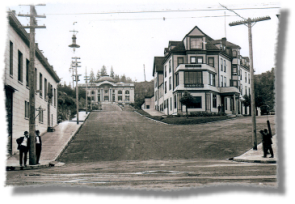 Original ALBEE HOTEL, 1891
Looking from Robert Bush Drive up Memorial Street
* The Pacific County Court House is on the hill behind 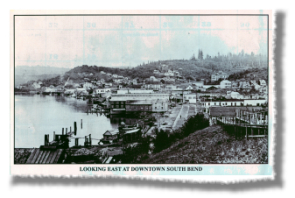 THIS IS A BREIF HISTORY OF SOUTH BEND WASHINGTON,
as told from the Pacific County Historical Society located
at 1008 Robert Bush Dr. (Hwy 101)

In 1869 Valentine and John Riddell, brothers who lived at Brueport since the late 1850's, decided to build a sawmill about four miles up the Willapa River where the channel made a big swing to the south for almost a mile: then swung slowly back toward the north, almost opposite to its previous course.

The mill was constructed: a wharf built, and a few mill workers began to arrive. Along with them were some homesteaders who took up land along the river, above, below, and across from the mill site. Thus was created the first settlement, which was later to become known as "South Bend", named from the South Bend curve in the Willapa River at the site of the sawmill.

In 1875, the first post office was established, and the town was officially recognized as "South Bend". It was also in this same year that the first school opened classes on Nob Hill.

In 1889 the South Bend Land Company was created, and lost no time in platting the ideal city and placing it on the market In the first few months of 1890, the word was out and the "Boom" was on. Land was gobbled up as quickly as it was put on the market. In August Commerce Addition was offered for sale on the north bank of the Willapa River, inaccessible except by boat; but the advertising stated "Following diking of the waterfront lots here, construction will begin immediately on the streets in this addition".

The "Boom Year" was 1890. Builders were busy erecting new residences for the town's citizens at all the ideally located spots throughout the townsite. In 1889 there were approximately 150 people in town. The 1890 census showed a population of 876, by 1895 it was 3500. Industry was spreading and buildings were going up everywhere. In June 1890 the Bank of South Bend opened its doors in the South Bend Land Company's offices. In Sept 1890, the Pacific County Bank opened for business. The South Bend hotel and Improvement Co. filed incorporation papers for construction of a hotel and other buildings with a capital of $50,000. In 1891 the Hotel Albee was erected for the then enormous sum of $12,000, and the Bristol-Leonard Sawmill was under construction opposite the present Willapa Harbor Iron Works.

Land Company owners gave generously of lots for religious groups, the new school, and civic enterprises. The new Methodist Church was dedicated Sept. 21, 1890. Other churches, Presbyterian, Episcopalians, Baptist, which was dedicated July 15, 1891, Congregationalists and Roman Catholic followed in close succession. Prior to the construction of the church buildings, Holcomb Hall (the top story of the South Bend Land company's building) was used for all forms of religious services, each group being given a different hour in which to hold services on Sunday's.

Churches, homes, schools and industry were not enough to make a model city however, and on Feb. 7 1890 the "South Bend Enterprise", the first local newspaper, made its debut under the editorship of William F Wallace.

By this time South Bend was aflame with enthusiasm. Every citizen from land promoter to renter had great faith in the future of the boomtown. It was to be the "Baltimore of the West" and the "San Francisco of the Northwest".

In May of 1890, civic demand had become enough to bring about a "Board of Trade", later called the Willapa Harbor Chamber of Commerce". One of their earliest projects was starting procedure for incorporating the city.

After South Bends actual incorporation, on Sept 9 1890, a citizens committee sent out notices for election of a mayor, treasurer, and five councilmen to govern South Bend. A caucus was held the week of Aug 22 to select Capt. Stream, a Bar Pilot on Shoalwater Bay, to head the citizen's ticket. This was followed by another caucus and filing of a Progressive Ticket with Judge Holcomb, of the South Bend Land Company, as candidate for mayor. The latter ticket won by a landslide, and the Sept 12 issue of the newspaper stated, "Never even on July 4th, was such a joyous and festive spirit apparent as on election eve. Huge bonfires and torch parades were held all over town, and groups of citizens visited from house to house.

The Chamber of Commerce was responsible for organization of a fire department consisting of a bucket brigade. The group also appointed a committee to purchase a boat to carry mail and passengers from Astoria. In 1891 the total tax valuation of South Bend realty was over $2,500,000.00.

Even as the Land Company was selling its first lots, plans were under way to attract a railroad to the area. On April 18 1890, it was announced by the South Bend Land Co. that an agreement with the Northern Pacific Railway, in which reportedly, the company gave right of way along one half of its extensive holdings to the line as an inducement to build. The Northern Pacific, in return promised that by December, 1890, a line would be built from South Bend to Chehalis, and that regular passenger service would be provided for the area. Cooperation was close between the Land Company and the railroad and the Land Company, and immediate plans were made for the construction of a beautiful $75,000.00 hotel. The Hotel Willapa, not far from the railroad in a block between Jackson and Harrison streets. The hotel was conveniently located near the railroad terminal, and as the hotel structure rose, faith and enthusiasm grew in South Bend. Dredging of the river began and filling of the East End lots began in earnest. Over 200 acres were filled, and in 1891 a $40,000.00 contract was let for the full width street planking of Broadway Street from the river and railway terminal to the new hotel at the top of Alta Vista hill. Lots in the Broadway street area were now selling for as high as $1800 to $2500 each. Rumor ran high that South Bend was to be the big Pacific Northwest terminal for the Northern Pacific Railway in Washington. The dream was, however not to be fulfilled. The Hotel Willapa was used for one brief, glorious evening. The terminal was not located in South Bend, and as time went by, local residents and speculators held the land for so high a price that industrial interest waned. Private investors were no longer interested in the "Planned City of the Future". Assessed valuation of South Bend, which was $2,581,00 at the close of 1891, began to drop rapidly. By 1895 the valuation of the same area was only $414,320

The east and west ends of town competed fiercely as to which would be the commercial center of the town. But a series of fires, mainly destroying business of the East End, resulted in the gradual loss of business in the district. This, along with the failure of the completed Hotel Willapa to open, ultimately caused the West End to be the downtown business center.

The railroad was completed to South Bend in 1893, but was never extended to Yakima, which doomed South Bends hope of being a major port for eastern Washington.

The economy of the county and of South Bend declined severely in the next few years because of the over harvesting of Oysters, abandonment of the Chehalis Yakima link, and over investment, the consequences were made even worse by the mid nineties national financial crisis.

In the early 1900's cash was again available for promotion and building of mills. The neighboring town of Raymond was just beginning and the Raymond Land Company welcomed such industry. But ironically, while South Bend still had the advantage of better combined transportation and accessibility by water and rail, as well as the better topographic site for a town, it now had no industrial sites available, the Land Company having given away the industrial waterfront sites to the railroad. Therefore the second economic surge in the area occurred in Raymond, and its population became larger than that of South Bend, whose numbers had declined to about 2300 in 1920.

The need for spruce and other timber in world war one revived the railroad and timber industries in the Willapa Bay area. Following the demise of the Eastern Oysters, which had been successfully introduced to the bay in the early 1900's, the introduction of the Japanese oyster in the 1930's revitalized the oyster industry.

South Bend still had the natural advantage of the navigable river, the rail connection, and the timber, fishing, and oyster industries providing support for its population. For these reasons the town survived, with highway transportation ultimately replacing that of the railroad